The Rise and Fall (and Rise) of Office Cubicles

If you’re reading this in your office cubicle right now, you probably hate it – and you’re not alone: 93% of Americans do. Perhaps you’re in some sort of open office floor plan, but you probably hate that too. Whether it’s the isolation of the cubicle or the constant chatter of the open office that impedes your productivity, there doesn’t seem to be any solace. How did we get into this mess?

The Medieval Origins of the Cubicle

If you hate your office cubicle, you can blame medieval monks for creating them in the first place. Medieval European monasteries had spaces devoted to writing and copying manuscripts, called scriptoriums, which were the medieval origin of our modern-day cubicle.

As can be seen in this painting from 1494 by the Italian artist Sandro Botticelli, the cubicles used by medieval and Renaissance scribes came with shelves and even a curtain for privacy. They also suggest that the individual alcoves were designed to boost focus and productivity while working, and reflected the solitary nature of scribing.

The Birth of Office Buildings

The rise of the Industrial Revolution in the 18th century brought significant changes to the structure of work. While professionals like lawyers and civil servants had previously worked at home, the emergence of large companies during this time led to buildings dedicated solely for office work. The first office building was built in 1726 for the British Empire’s Royal Navy, and is still used to this day. Just a few years later, the East India Trading Company built their headquarters in London for its employees.

At the time, individual workspaces were still seen as a method of boosting productivity. An 1854 report from Britain's Permanent Secretary to the Treasury, who developed the country’s Civil Service system, wrote that “For the intellectual work, separate rooms are necessary so that a person who works with his head may not be interrupted.” As companies grew, however, the possibility of each employee having their own space to work diminished. 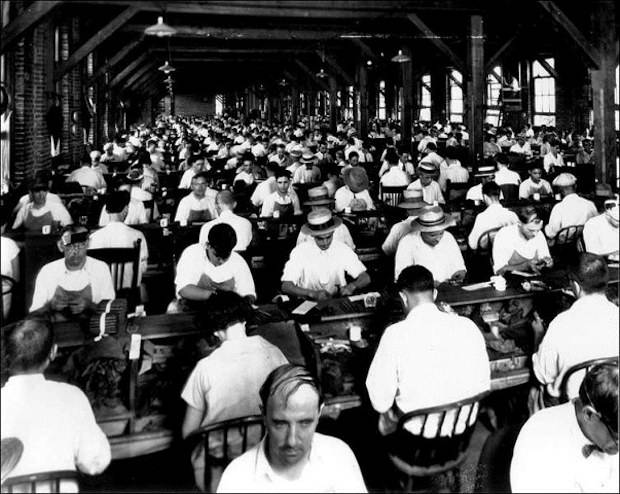 The Open Office Plan Takes Over

In the early 1900’s, mechanical-engineer-turned-management-consultant Frederick Taylor’s theories on efficiency in the workplace became incredibly influential. His theories of workplace management called for maximum efficiency and productivity, which was reflected in office designs of the time. Modeled after factory assembly lines, clerical workers sat at rows of desks in a large room so managers could surveil the workers.

Famed architect Frank Lloyd Wright drew inspiration from Taylorism when he designed the headquarters for SC Johnson Wax in 1936, which was the first open office building. Though primarily designed to maximize productivity, it also introduced more comfortable elements to office design, such as warm lighting and acoustic panels. Taylor and Wright turned the tide against cubicles in favor of open office space, but the disadvantage of this approach—less privacy—was already becoming evident, and cubicles were bound to strike back.

In the early 1960s, open office layouts lost their rigidity and uniform composition as the German concept of Burolandschaft, meaning “office landscape,” spread. Instead of the scientific factory-line approach inspired by Taylorism, Burolandschaft suggested that employees be grouped in pods organized by function, with natural barriers such as plants creating partitions. This office layout also encouraged more social interaction and communication between workers.

Not everyone was a fan of Burolandschaft, though. Robert Propst, the president of Herman Miller Research Corporation, wrote, “Today’s office is a wasteland. It saps vitality, blocks talent, frustrates accomplishment. It is the daily scene of unfulfilled intentions and failed effort.” His response was the Action Office, a modular system of desks and filing systems that created individual workstations for each worker.

Propst’s rationale for the Action Office was that workers needed large, dedicated spaces for different types of work – a space to write, to make calls, and to file documents, rather than the jumbled mess of having them all on the same desk. His desks even had adjustable heights, so workers could or stand while using them. But when it launched in 1968, it flopped: it was too expensive and employers didn’t see the need for it.

Due to the poor sales, Propst redesigned the modular system and launched the Action Office II, what we now know as the modern cubicle. With three partitions, employees could sit in their own enclaves as they worked and focus on the task at hand, similar to the medieval cubicles used by monks. 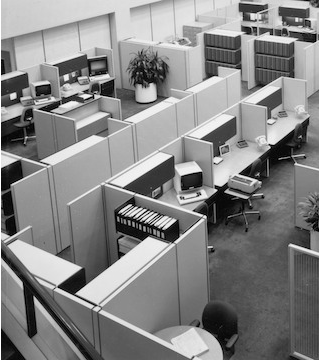 While Propst envisioned employees customizing their workstations to their taste as they created their own personal oasis in the office, employers had their own intentions. As the Action Office II soared in popularity, it inspired a wave of cheap knockoffs without the flexibility and freedom Propst had envisioned. Instead, employers realized they could fit many more workers into one room by restricting them to a much smaller and confined cubicle.

In the decades following, the cubicle farm was eagerly adopted by managers across America. In the 1960s, the Treasury Department announced new rules for depreciating assets like office furniture, hoping to stimulate business spending. Consequently, cubicles became an even more attractive option as they could be depreciated in just seven years. The cubicle became even more commonplace in the ‘80s and ‘90s during a period marked by mergers and buyouts as employees were shuffled around office buildings and crammed into even smaller spaces.

During the dot-com boom of the ‘90s, startups seeking to change the status quo and be different decided to disavow the cubicle altogether. Architect Clive Wilkinson, who designed the interior of Google’s headquarters, explained that “the attitude was: We’re inventing a new world, why do we need the old world?” Facebook adopted the same approach in designing their own headquarters, which the company claims is the largest open office in the world.

But the open office had just as many issues as cubicle farms, if not more. While the open office was designed to foster collaboration and communication between employees, research has shown that workers in open offices actually spend less time talking face-to-face and resort to emailing or messaging. Additionally, many workers say the constant noise and lack of privacy increases distractions and reduces productivity.

Return of the Cubicle?

With so many office workers dreading their open office floor plan, we’re beginning to see the office cubicle returning to the workplace, though slightly adapted. To reintroduce a sense of privacy, workers are opting for privacy panels and other partitions to establish their own territory, even if they’re in an open office floor plan. There’s also been a return to the Burolandschaft model, with floor plans being designed more naturally with dedicated areas to eat, lounge, meet, focus, and work.

What comes next for the cubicle? One scenario is the eradication of the workplace as we know it. Increasingly, employees are opting to work from home or elsewhere instead of at the office, and by some estimates, these workers will comprise 50% of the workforce by 2020. Not only does it provide the ultimate method of flexibility, doing so allows employees to work in the environment they’re most productive in – the “cubicle” of their home.

This scenario won’t come to pass for the majority of businesses any time soon, and neither will a return to bland 80s-style cube farms. But the core principles represented by the cubicle—an emphasis on privacy, focus and individuality in the workplace—are once again returning to the fore, playing a larger role in how we get things done.

Images via WSJ.com and HermanMiller.com