The Evolution of Commute Time

How has average commute time evolved through the ages? By examining how commutes have changed across five eras of mass transit and productivity, we can better understand why we commute today, and how we might commute in the future.

How has average commute time evolved through the ages? By examining how commutes have changed across five eras of mass transit and productivity, we can better understand why we commute today, and how we might commute in the future.

Commuting is a near-universal part of the modern human condition. It’s no exaggeration to claim that it’s one of the most time-consuming parts of our daily lives: the average American worker spends 52 minutes a day traveling to and from work.

In some ways, today’s commuters have more to look forward to than in years past. We sit in comfortable seats and catch up on podcasts, read books, listen to music, or talk to friends and family on our way to work—all made possible due to improvements in mass transit. From horses and elevated rail to cars, subways, and shared bikes, commuting has evolved considerably.

But how has average commute time evolved? Are the biggest improvements in travel efficiency behind us? By examining how travel time has changed across five eras of mass transit and productivity, we can better understand why we commute today, and how we might commute in the future.

Density and Mobility Are Key Inputs To Commute Time

Before diving into our analysis, what are the major factors that influence commute time? There are two drivers (pun intended) of a lengthy commute:

Taken together, density and mobility determine how much time you spend getting to and from your job every day. With this framework in mind, let’s investigate how commute time has evolved over the years in and around NYC.

In the beginning, there was no commute. Before the Industrial Revolution, most people lived and worked in the countryside. Travel was rarely attempted; it was expensive and often unnecessary for inhabitants of an agrarian society. Our current definition of commuting—routinely traveling a considerable distance between home and work—didn’t quite exist until the 19th century.

As farming gave way to new forms of energy and production, demand for labor in urban areas exploded. Immigrants and natives flocked to cities for more consistent work, causing housing supply to tighten and living standards to sink into unhealthy territory. By the mid-1800s, the slums in industrial areas were so full that working families began to move outwards, with more affluent citizens colonizing the fringes of cities.

In New York City, for example, the seclusion that wealthy New Yorkers sought made traveling to their workplace an ordeal—merchants and bankers occasionally walked two-plus miles (approx ~40 blocks, or ~40 minutes) from Midtown to Wall Street. Then in 1814, the Fulton Ferry Company gave birth to America’s first commuter suburb: Brooklyn Heights. The Heights grew in popularity due to its fresh air and proximity to Manhattan; it took a typical commuter an hour to go from work to home. By 1860, Fulton’s Ferries carried a hundred thousand workers across the East River each day. 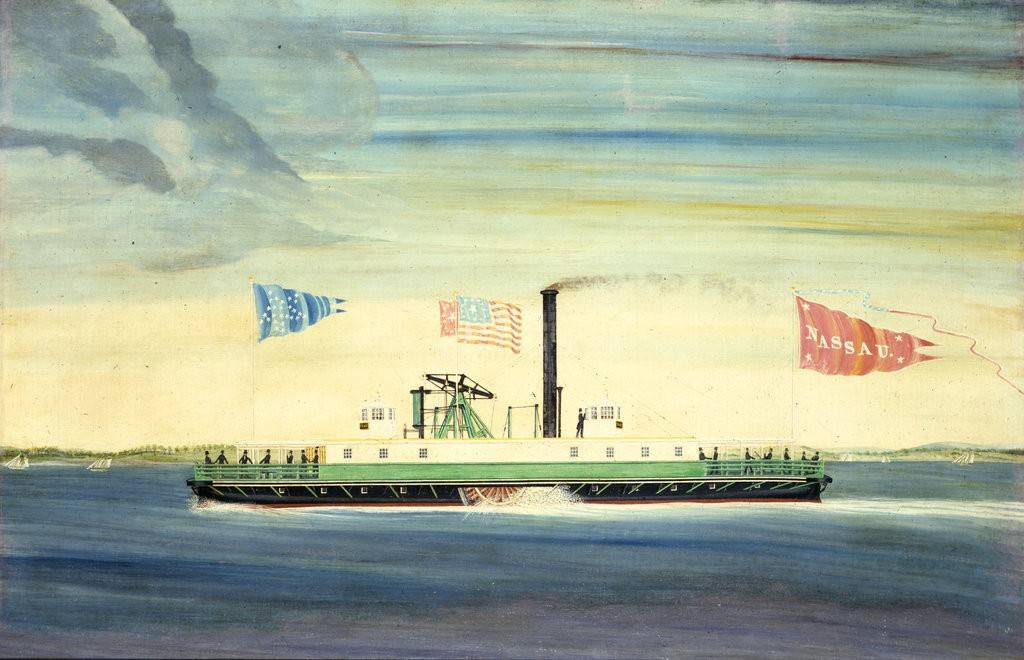 Ferry boat service transformed the commute of the mid-19th century for major metros that straddled rivers and waterways. But on the mainland, transit innovation lagged—walking remained the most common form of commuting in cities. Commuters were segmented by income: the poor had minimal commutes because they couldn’t afford it, while the affluent spent money on ferries.

As the 19th century developed, urbanites wanted an alternative to the tiresome commute by foot, and their wish was granted in 1828: NYC received the first omnibus. Think of it as the first ever carpool: a large, horse-drawn wheeled carriage carrying up to 40 passengers at a time. But omnibuses were overcrowded, slow and uncomfortable as they wheeled along roughly paved and uneven streets. 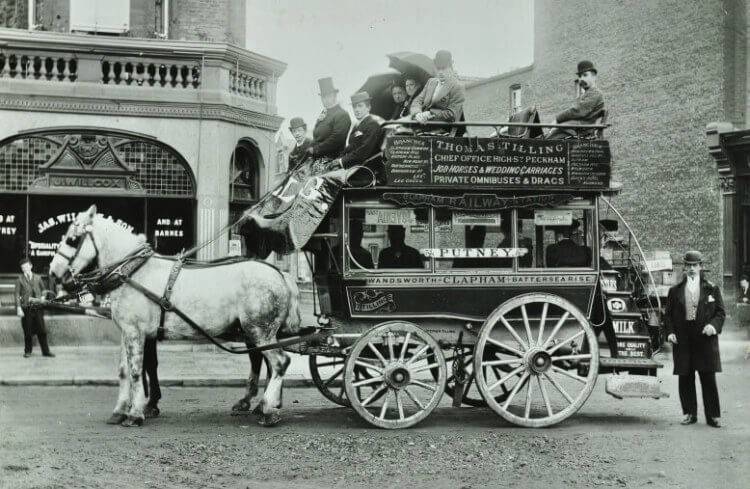 To combat the friction of coach wheels on dirt and stone, some cities built iron tracks in streets for horsecars, marking a first foray into on-demand rail-based transit. Horsecars allowed for a faster and more comfortable ride, traveling at an average of 6-8 mph compared to the omnibus 2-5 mph. They were also the first mode of transit to appeal to commuters on a mass scale, regardless of income—a typical trip cost riders 5 cents. Horsecars—and the rails upon which they traveled—spurred the redefining of city commuting and served as the foundation for electric streetcars to come.

Although rails were an improvement, the top speed of any horse-drawn transit method was limited. From the perspective of commute time, the benefit of their incremental speed over walking was counterbalanced by traffic and increasing commute distances that resulted from urban sprawl.

By the late 1800s, the street had evolved from a place of recreation to a venue for mobility. Yet neither steam nor horsepower was sustainable for urban transit; both caused pollution, were expensive to maintain, and didn’t carry a sufficient density of commuters. Cities needed a form of mass transit to make commuting efficient.

In 1867, a number of enterprising companies in New York City launched elevated railroads above urban neighborhoods, laying the groundwork for the first form of rapid transit. 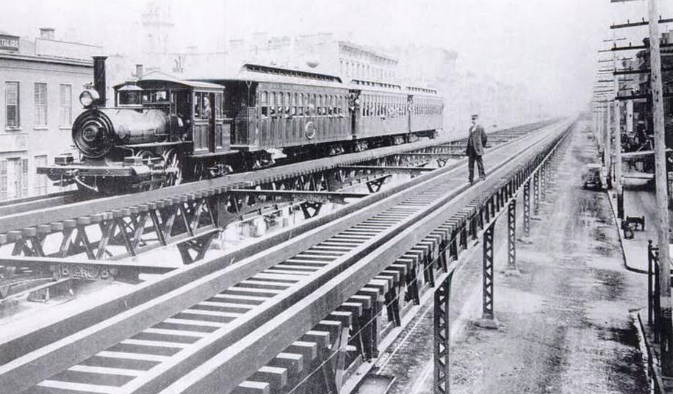 The benefits of elevated rail were clear: vehicles could go faster, avoid traffic and in doing so travel in less than half the time of a horse-drawn streetcar. But elevated rails turned out to be a stopgap solution, producing negative effects—loud noise from night trains and falling coal ash—that affected communities near transit routes.

Envisioning a better rail solution, engineer and Thomas Edison protégé Frank Sprague used a new form of energy to pioneer the world’s first electric streetcar in 1888. Instead of heavy locomotives hauling the dead weight of train cars, each streetcar was powered by multiple-unit control, allowing for greater speed and acceleration (up to 15 mph). 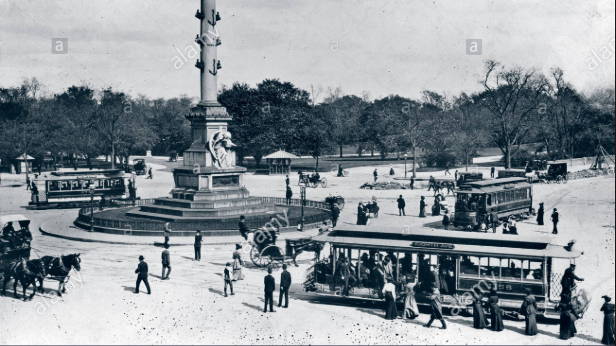 The effect on public transportation and urban design was enormous. The downtown commercial city layout we’re familiar with today was facilitated by streetcars. By making it easy to quickly go from one part of a city to another, streetcars not only proved mass transit could be sustainable, but provided the blueprint for eventual subways—a form of commuting that would make living away from downtown more feasible than ever.

The first electrified underground railways were built in London in the 1890s, but the trains were slow, averaging just 13 miles per hour. It wasn’t until Boston’s initial three-station route launched in 1897 that the US caught up to Britain. 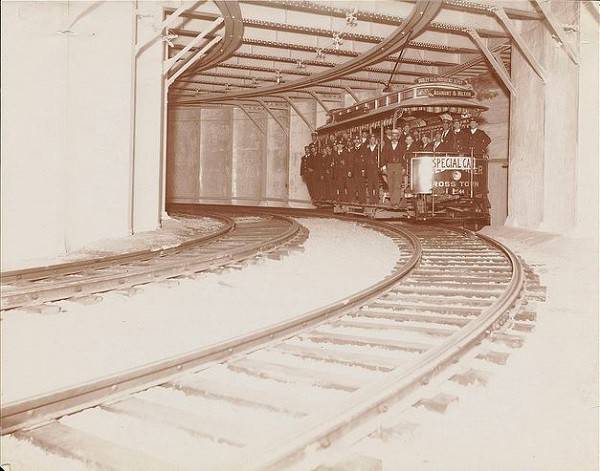 Soon after Boston’s launch, other cities followed suit in subway development. NYC’s Interborough Rapid Transit Company service began connecting the Bronx to Manhattan in 1904, with express cars surpassing 40 miles per hour—six times faster than the city’s electric streetcars. This feat made the NYC subway the fastest rapid transit railway in the world.

Electric underground trains proved to be a windfall for commuters around the country. Unconstrained by the natural limits of previous trains, subways traveled well beyond major cities and helped stimulate wide-scale suburbanization in the early 20th century. Commuters were trading proximity for space—a trend that would culminate with the automobile.

The era of the automobile began in the early 20th century. Ford’s Model T represented a shift away from mass transit: by 1920, eight million Americans owned a vehicle. Commuters fell in love with the automobile for its sense of empowerment and individual freedom—qualities absent from riding a train or bus. For commuters who didn’t own a car, jitneys cruised city streets like cabs do today, giving workers the flexibility to be dropped off at a specific location.

By the mid-20th century, America had become an automobile nation. In 1956, the interstate highway program sanctioned the government to cover 90% of urban highway costs, allowing for the development of over 46,000 miles of wide, multi-lane expressways. The highways promised to eliminate traffic congestion and increase fluidity from suburb to city—but rush-hour stalls persisted for commuters in many parts of the country. 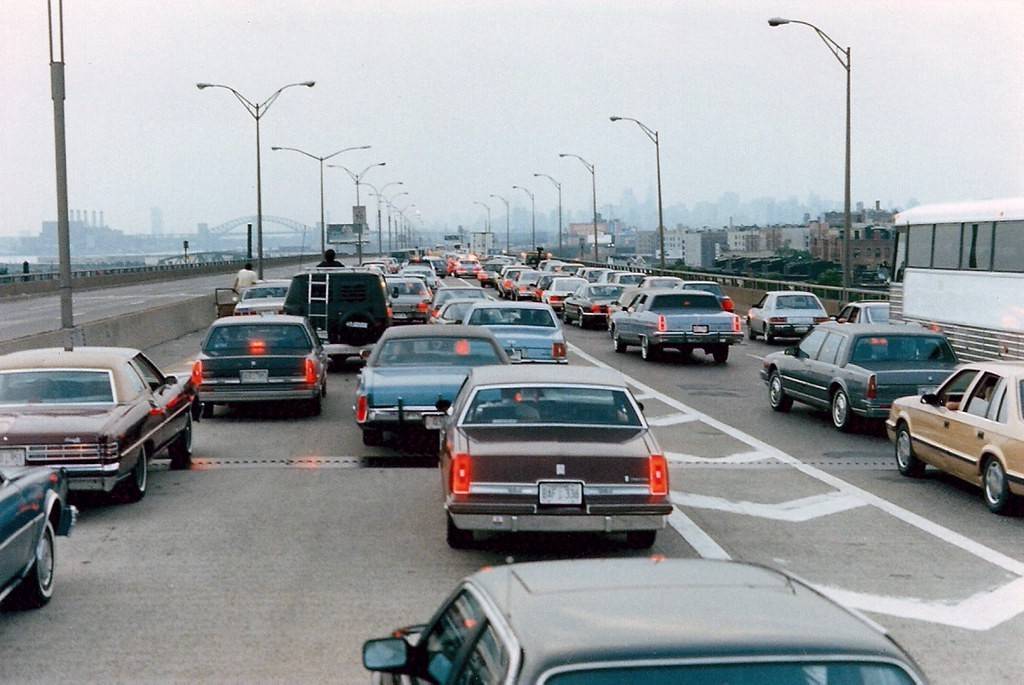 Our generation of commuting is characterized by autonomy, but this freedom arrives at the cost of speed. Traffic in industrial areas is notoriously bad—causing average commute times to be much higher for drivers than public transit users.

The Future of Commute Time

So what’s in store for the next generation of commuting?

For starters, we can expect data to continue playing a role in commuting efficiency, whether in the form of mass market GPS tools (e.g. Google Maps) or routing innovations pioneered by ride-hailing companies like Uber and Lyft. Precise, real-time knowledge of travel conditions allows people to coordinate how they commute and choose the quickest available option.

We can also expect a reduction in car ownership in the coming decades. The vast majority of commuters still drive to work today, but growing concerns surrounding speed, safety, and environmental sustainability have created opportunities for alternatives like ride-sharing. Some cities (e.g. Miami, FL) have facilitated this change by passing legislation that reduces parking requirements in transit-rich areas, creating a virtuous cycle of reduced auto dependency.

Lastly, the changing nature of work will play a nature in our commute. The growing viability of remote work provides an opportunity for forward thinking companies to create distributed micro campuses, where teams can enjoy local collaboration and stay connected to the broader organization without commuting to a central hub.

Our Commute Experience Is Due For Change

Commute time today is the result of several decades of technology and infrastructure improvements. For the modern commuter, metro areas offer a host of options that give travelers more choice than ever. The question of “what’s the quickest way to work” has evolved into “how do I want to get to work.”

Despite these improvements, there has been a clear push and pull in our experience of commuting: though transit has constantly improved in speed and comfort, density subjects us to traffic and distance that bring our commute times back to equilibrium.

Ultimately, reimagining the way we get to work will involve reshaping our relationship to work and living. Beyond self-driving cars and bullet trains, the forces of urbanization and change in the nature of work will compel us to rethink how we manage road space, address questions about transport equity, and develop new approaches to public-private collaboration. We’re ready to see how these factors and more drive change in our commute time.